My schemes, they gang aft agley.

I plan out these knitting designs of mine with care. I sketch. And I think. And I walk and think. And I mess around with yarn.

And then I actually knit these things I’ve schemed. And they end up looking completely different from what I had intended. 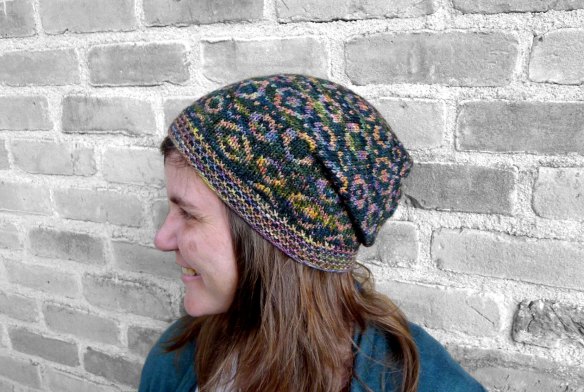 Case in point: my new Prosecco Hat. Here’s what it was supposed to look like. It was going to have a hem at the bottom, and was to have a two-color bubble motif whose color scheme reversed about halfway up the hat.

Neither one of those things worked out exactly. Problem #1: The internal part of the hem would have had to have been ridiculously long in order to play nicely with the color pattern, so it got jettisoned. Now I was stuck on what to do with the brim of the hat. Plain ribbing seemed dull. Corrugated ribbing is lovely but I feel like it’s almost become a cliche for a color-work hat.

I finally found a slip-stitch pattern (what you see on the finished hat above) that gave the brim of the hat some interest without detracting too much from the bubble pattern I’d worked so hard to chart out. Problem #1 solved.

On to problem #2: I was designing this hat for Malabrigo’s Quickies program. Believe me, that part in and of itself is not a problem. They have been great to work with.

The problem was the yarn. Well… no wait, not really the yarn, because the yarn is the luscious new Arroyo, Malabrigo’s sport-weight, superwash merino. It is scrum-diddly-umptious. No, the problem was that the two colors that I chose (VAA and Arco Iris) didn’t quite contrast with each other as much as I thought they would. Changing the two colors mid-way up the hat, so that the foreground color became the background color and vice versa, just made the hat look garbled and confused. Like a cake that you frosted before it cooled off completely.

So the dark green VAA colorway would now stay the background color all the way up the hat. Not quite as much bubblicious fun as I had originally intended, but still, plenty of colorful fizz to go around. 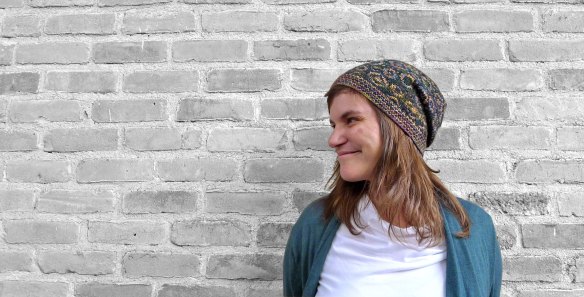 And then there was the photography. As I fall further down the rabbit hole of professional knitwear design, I’ve realized that I need to at least occasionally hire another pro to do my photography. I’m really only reasonably competent with a camera. I’ve got a LOT to learn.

Recently, I learned that a former student, Carlos Barron, had become a professional photographer, and I loved what I was seeing of his work. Mere days before I needed to get the Prosecco Hat pattern to Malabrigo, Carlos and I were finally able to schedule a photo shoot for this hat and a few other goodies.

And that’s when the entire middle column of the country got besieged with 100 tornados. So we had to postpone the shoot, but I still needed photos, and that meant heading for the trusty brick wall on the side of my house — the backdrop for so many of my knitting photos.

My husband took one of the above photos and my seven-year-old son took the other. See if you can guess who took which. (Hint: look at the angles.) They both did a pretty good job, but… well, none of us is Carlos.

In the end, I’m left with a hat that I really like and photos that I may need to replace. Not a bad outcome, all things considered. Just a little agley.